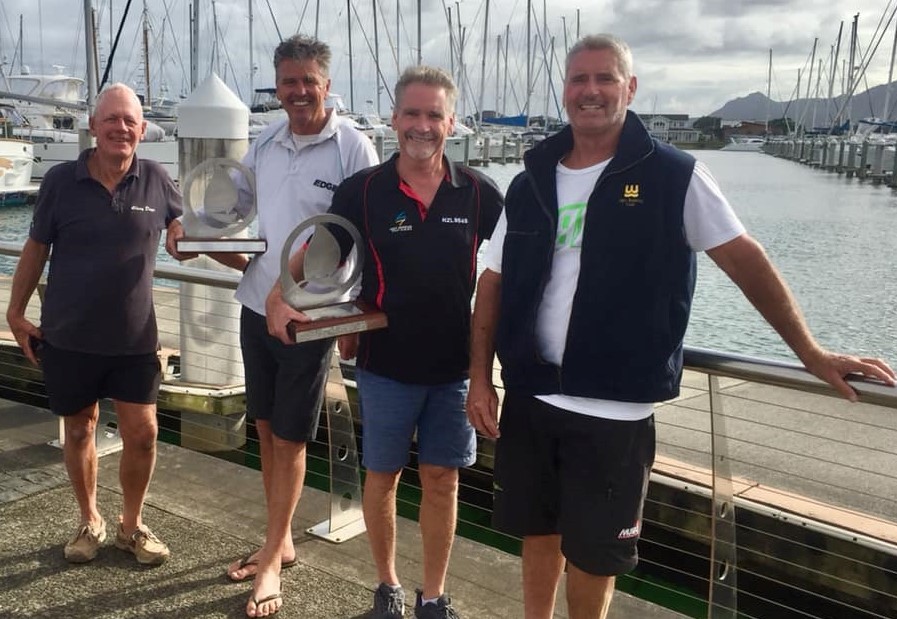 14 starters at Gulf Harbour joined the 31 yachts leaving the city at 9am on Friday morning for the Annual Route 66 race to Marsden Cove. The breeze was from the East, & a few days worth of established swell. Off the start line the fleet was hard on the wind with Big Kahoona leading the fleet through the Tiri Chanel. With cracked sheets Satisfaction II; two- handed for this event, gradually reeled them in to hold the front position across Kawau Island. Once Cape Rodney & Goat Island was rounded, a radio call to race control & sheets were eased & for some to reach their top speeds, extras were hoisted. With that the sea-state becoming a bit more confused, it was a less comfortable ride for some.

Hijinx & Big Kahoona jostled for position with Hijinx eventually getting passed & increasing sail area to take on Satisfaction 2. Looking northward, the skies were a scattered with a number of squalls & as the fleet separated the impact of where you were as the squalls moved eastward was apparent. Mid-fleet encountered 33knts during one squall whilst for the front players the impact was less feisty. Coming into the spectacular Whangarei Heads the tide was ripping out & and consequently the waves were significant. Top speed on Kick with their FRO was 15.4knts.

Hijinx took line Honours - finishing at 15:03 & last boat of the Division A3 came in at 17:15 with 8hrs 15mins of racing. The competitors received a very warm welcome from principal sponsors Marsden Cove Marina upon arrival & a bottle of Mount Gay Rum to share stories with fellow competitors into the evening. Thanks to Richmond Yacht Club, in conjunction with John Allerman, for co-ordinating and special thanks to sponsors: Burnsco Safety at Sea, Sailutions, PredictWind, Mariner Marine Insurance, Ropeye/ A-Z Marine Services, Floating Dock Services & Mount Gay.