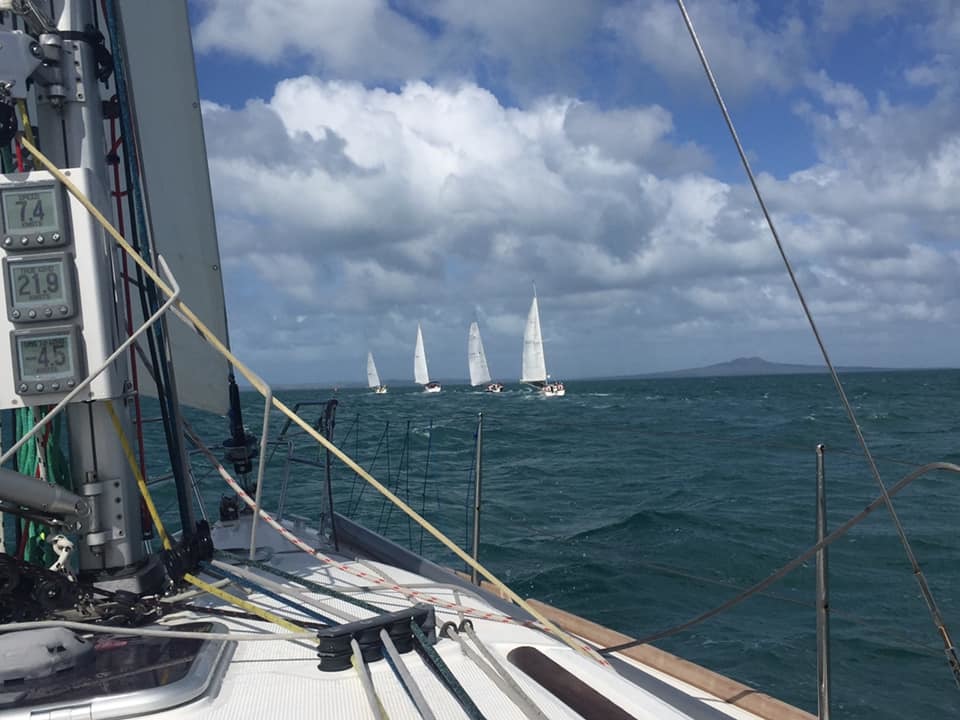 Race 9 & another Windy race for our Winter Race series ran by GHYC, with RO Richard Brown & his team, Miles & John on Olympus. Thanks to our sponsors - Hibiscus Marine Coatings & The Engine Room, who we will hopefully meet representatives of following the final race back at WBC in a fortnight.

Acknowledging the fluctuating westerly breeze with a base wind of low 20's, & regular peaks above 30knts, Race control hoisted Y Flag; Indicating all sailors who hadn't already chosen to don life jackets, were required to for participation in the race. Most of the fleet had chosen to place one or two reefs into their mains to accommodate the top end of the gusts, but factoring in the lulls was going to be a major factor to how many reefs & which foresail to use.

The White fleet commenced with an array of carnage; 2 boats over the line, 2 boats colliding, 1 boat from the gold division coming along for the ride, and possibly 2 skippers steering their crews to commence their race away from this drama at the pin end. With that havoc left in their wake, & some to be topics of discussion back in the club rooms following racing, the upwind leg was fairly even each side of the course with Enigma, Memphis, Kick & Share Delight rounding the first top mark close together. Odyssey V storms downwind. If you experience her in close proximity, her displacement of water is delight to behold, even if the gap between you and them is closing in their favour.

It was looking like the remainder of the race was to be a procession (which incidentally is the manner of play for the 30th anniversary celebrations at the end of the month) with only a few white kites hoisted mostly in the gold fleet. The second upwind leg mixed this up. Share Delight & First Priority from the white fleet took a big right encroaching on the waters of Frenchman's Cap, before tacking over to find themselves crossing ahead of the boats that went left & the orderly procession turned on its head.

Sarah & Ted on Chase had their work cut out today with laying marks on the strong breeze, & later providing a rescue service for a MOB when an overpowered spinnaker launched their foreword hand from the pulpit into the water. Excellent communication & quick response resulting in a soggy crew but nothing more sinister on a windy Spring day.

15 racers today with one race to go for this series. Placings throughout the table across the two divisions can shift with one set of race results.

Let's collectively make the last of the season in 2 weeks time a well turned out affair, use it as a shakedown before summer racing & chance to say thanks to all those behind the scenes who keep the cogs turning.

White division result are subject to the outcome of protest decision.